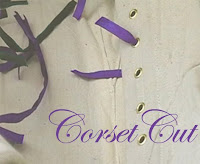 Corset Cut is a performance for video, shot in one take.
This short film features the artist being cut out of a corset by her mother.
The corset is an exact copy of a British Edwardian design worn around 1915, a period of heightened activity for the Suffrage Movement. Thornton was at this time also engaged in a series of works exploring women’s history and pioneering women figures in the later 19th early 20th centuries from fields of science/technology, espionage and aviation.

The film was originally shown in a gallery environment as part of a solo mixed media installation entitled 'Somewear in Particular', Galleri G.U.N. Oslo June 2003.
In this context the film was projected as a loop onto the inside of the corset piece which was suspended at chest height from the gallery ceiling.