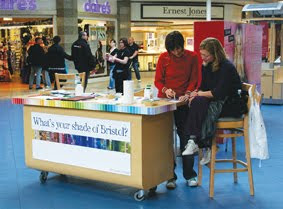 DIY Shades of Bristol A city-wide colour mapping project investigating everyday notions of Do-It-Yourself culture and colour associations relating to home and neighbourhood. The ‘map’ produced will be a limited edition swatch book recording the personal shades and DIY top-tips shared with the artist through over 60 conversations and encounters across Bristol. The swatch book and a selection of self-mixed eco-paints will be presented at Arnolfini and then (re)distributed through participants and their networks. The eco-paint mixing day is a free open studio activity (supported by Naturepaint) and the artist is also creating a special Family Event Mash Up.

DIY Shades of Bristol will be presented as part of Craftivism, Arnolfini
Bristol Dec '09 - Feb '10
Curated by Zoe Sherman/Relational

"Do it yourself, often referred to by the acronym DIY, is a term used by various communities that focus on people (called do-it-yourselfers or DIYers) creating or repairing things for themselves without the aid of professionals.

The notion is related in philosophy to the Arts and Crafts movement of the late 19th and early 20th centuries. Many modern DIY subcultures take the traditional Arts and Crafts movement's rebellion against the perceived lack of soul of industrial aesthetics a step further. DIY subculture explicitly critiques modern consumer culture, which emphasizes that the solution to our needs is to purchase things, and instead encourages people to take technologies into their own hands to solve needs.

The phrase "do it yourself" came into common usage in the 1950s in reference to various jobs that people could do in and around their own houses without the help of professionals. A very active community of people continues to use the term DIY to refer to fabricating or repairing things for home needs, on one's own rather than purchasing them or paying for professional repair. In other words, home improvement done by the householder without the aid of paid professionals.

In recent years, the term DIY has taken on a broader meaning that covers a wide range of skill sets. Today, for example, DIY is associated with the international alternative and hardcore music scenes. Members of these subcultures strive to blur the lines between creator and consumer by constructing a social network that ties users and makers close together. There are various communities of media-makers that consider themselves DIY, for example the indymedia network, pirate radio stations, and the zine community."